four years is an eternity.

four years is an instant.

while most days are easy,

and so i remember her—

and sometimes with peace.

“Do you want to take a photo to honor your mother?”

That’s the question my thoughtful, compassionate photographer asked me on my wedding day.

The dress was on. Hair and makeup, done. Chandelier earrings dangling by my cheeks.

I didn’t know what to say. I didn’t say anything at all.

Todd had decided to take a portrait holding his mother’s cowboy hat across his chest. Perhaps I wanted to do something like that?

“Maybe in front of one of her paintings?” the photographer offered.

I stared at my hands. I tried to focus.

It wasn’t that I hadn’t put plenty of thought into how to honor my mom at my wedding. I’d considered empty chairs and photographs. Special songs and moments of silence.

And that’s how I honor her. 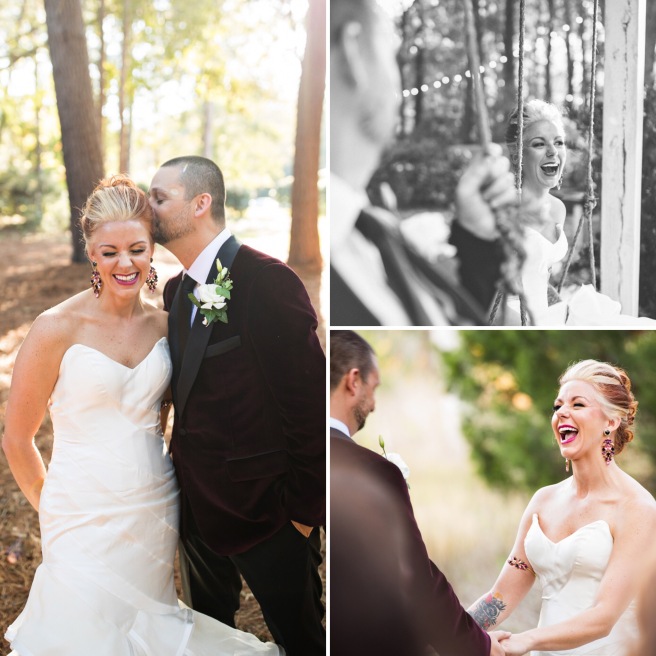 (Because some feelings will only be processed in writing)
__

I tell myself I’ll be just fine,

When Christmas comes to pass.

I’ll wear a smile above my scarf—

With mulled wine in my glass.

I’ll play the songs I love the most,

But there’s one I’ll dread to hear.

The one with words I know too well:

I’ll wrap the presents up in bows,

String lights around the tree.

I’ll hang the stockings in a row,

But as the day looms closer still,

My thoughts will linger on.

And in five days, you were gone.

My toenails, they were sparkly green

At your funeral last year.

I looked down with misplaced shame

At their burst of Christmas cheer.

And I’m not sure how I’ll manage

On this year’s Silent Night.

If you were here beside me—

Avoiding all that’s Mary and bright—

And make everything all right.

Those words that set me free:

“When you celebrate the memories,

You still celebrate with me.”

I have no pointed answers.

Forty-two words are far too few

To contain her wisdom, her truths.

Just as fifty-seven years were too few.

But that’s all Mom was given.

I watched a movie last week. It opened in a hospital with a mother on her deathbed.

Her young son standing by her side, holding back tears.

She looked over at him with tired eyes. And said sweet things like I love you, and you’ll be fine, and don’t you worry about me.

Before she drifted gently away.

All glitter and glamor and Hollywood.

And I didn’t know it until last year.

Before anyone dies in the movies, they get to say their final lines.

They get to finish their role.

They get to play their part.

Death comes in when you’re all alone in the hospital on Sunday night.

Because visiting hours are over. And your husband has gone back home.

When you think it’s just a bad cold, but really it’s pneumonia.

When they say you’re in ICU just as a precaution, but a third of hospitalized pneumonia patients don’t make it.

When the doctor comes into your room far later than he should for the day,

And you have to take notes with shaky hands because no one is there to take them for you.

And your two daughters are scattered across the country.

Planning their Christmas visits to see you.

And they have no idea what’s coming.

And neither do you.

So you scribble down jagged notes in your tiny book and put it in your purse to tell Tom the next morning when he returns to your side.

But you never get the chance.

And all alone, you slip into a coma.

With no one to tell your final lines to. No one to hear your goodbyes.

In the movies, the hospital patients look like mannequins.

Sickness is painted on with makeup.

Medical equipment is just another prop.

There are flowers on the bedside.

Death looks like me calling Southwest Airlines in a panic to try to move my Christmas trip five days earlier because my mom might die.

Death looks like packing a black turtleneck dress next to a reindeer sweater because I’m not sure what the next seven days have in store.

Death looks like crying at an airport bar on a Monday afternoon while my flight’s delayed for two hours.

There is no glitter, no glamor in death.

And when I get to the hospital I’m rushed down dingy corridors lit by humming fluorescent overheads. It smells like latex and bleach and sweat (that I realize only later is actually my own).

Family members are on their phones contacting more family members. Everyone looks up when I arrive, but no one smiles. That’s what death looks like.

Like a monstrous version of the woman I call mother.

Blown up with so much fluid. So swollen I’m scared to touch her. Scared she might burst.

Big puffy blisters all over her turgid face.

Tubes shoved up her nose.

Needles coming out of her skin.

And small splotches of blood on the blanket from everywhere she’s been stuck.

In the movies, even the dying have a good hair stylist.

But mom’s soft hair was matted up on top of her head in a sticky, messy sumo-wrestler style bun.

She was foreign to me…unfamiliar.

I had to squint and study to recognize my mother in this ballooned woman lying on that hospital bed.

Death looks like an oxygen monitor that keeps dropping further and further away from 100.

Death looks like a plastic bag that won’t fill up with urine.

It means she’s too sick. It means her organs are broken.

It means she’s not getting better.

It means she’s not coming back to say goodbye.

Death looks like planning a funeral four days before Christmas.

And opening the presents she got for me on the floor of her living room. Underneath her pink and white tree. Without her there to watch. Or hug. Or thank.

Without a second take.

Publisher’s summary: Trying to make sense of the horrors of World War II, Death relates the story of Liesel – a young German girl whose  book-stealing and story-telling talents help sustain her family and the Jewish man they are hiding, as well as their neighbors.

“The only thing worse than a boy who hates you: a boy who loves you.”

“I am haunted by humans.”

“I have hated the words and I have love them. And I hope I have made them right.”

Synopsis: Narrated by Death, The Book Thief tells the story of a small town outside Munich during World War II. In that town, there are families who love Jews and families who fear Hitler, all trying – above all else – to simply survive. Most closely, the story follows Liesel Meminger as she is dropped off with foster parents by her Polish mother. Liesel’s love of books becomes a focal point of the novel as she begins stealing them from around the town, making plenty of friends – and enemies – along the way.

Sometimes, I feel silly loving a young adult novel as much as I love The Book Thief, but then I remember how good it is and think, I don’t care. Every page of this book is dripping with tension, fear, and hope.

That the novel is narrated by Death only makes it all the more haunting. But Death is crafted as a compassionate, gentle collector of souls. I found the way that Death is portrayed to be so comforting, it shifted my entire perspective on dying. And his voice is quite unique, even poetic, making reading his words all the more enjoyable.

From start to finish, this book is powerful, terrifying, and relentless. It will break your heart, but I promise, it will be worth it.

Who should read this book: Anyone who loves a good book. Really, just anyone. This book is beautiful.

You probably didn’t know, when I was two and hooked up to tubes and monitors in a hospital emergency room…When one of my organs wasn’t formed quite perfectly and the surgeons offered no promises what the next moment would bring…And you held my tiny, soft hands and stood by my bed and whispered gentle lullabies in my ear…You probably didn’t know that I would return the favor 25 and a half years later…And stand guard alongside your hospital bed…And sing you songs and tell you jokes and pray, and pray that you would stay a little while longer.

You probably didn’t know, when you brushed my hair and pulled it into a taught, perfectly smooth ponytail, when you pinned a giant bow to the very top – one with glitter or buttons or polka dots…When you tied my shoelaces and smoothed my ruffled skirt hems and wiped the dirt off my elbows and told me I was brilliant and beautiful and could be whatever I wanted to be…You probably didn’t know that I believed every single word…And never let doubt or fear settle anywhere near my dreams.

You probably didn’t know, when you tucked me in at night, and we read A Wrinkle in Time or Mr. Popper’s Penguins…When we said prayers out loud in that intimate space, when you kissed my forehead and pushed play on the cassette tape so I could fall asleep…You probably didn’t know how hard it was not to follow at your heels when you turned to go. How I longed for you to come back to me before you even left the room.

You probably didn’t know, when you planned my elaborate birthday parties – with goodie bags and piñatas and birthday cakes thick with sweet cream frosting…When I inhaled until my lungs felt as light as the balloons tied to the back of my chair and blew forcefully at the candles, trying to extinguish those melting time bombs before the wax collided with the cake below…You probably didn’t know every wish I made was for us to be healthy and happy and together forever…Every flame held the promise of a long life…Or so I believed as watched their reflection flicker in your endless brown eyes.

And I guess I didn’t know, when I talked to you 10 days before Christmas, and heard your hoarse voice on the other end of the phone telling me it sounded worse than it really was…And I told you to rest and carried on buying coffee mugs and goat’s milk soap and chocolate covered cashews for your stocking…I guess I didn’t know that would be my last, “I love you.” And there was so much more to say.

And I guess I didn’t know, when we sang the hymns and hugged and wept, when we called it a celebration even though we all knew it was a funeral…When we sat on the rows marked “reserved,” the rows that no one ever wants to be waiting for them…I guess I didn’t know how broken my heart would be.

And how much we all need our mothers. And how I would still need you.