“My mother is dead.”

I don’t say it to make people uncomfortable. Or to get attention or pity. I say it because it’s true.

My mother is dead. And she has been for three and half years.

When people who could be my mother’s age find out my mom is dead, the first question they ask is how it happened.

They look incredulous. “People still die from pneumonia?” (Even if they don’t say it, I can tell that’s what they’re thinking.)

I’ll nod in response. Yes, yes they do.

The next thing they want to know is how old she was when she died.

They wrestle those facts together and arrive at the same inevitable conclusion: It could have been them.

I got my first tattoo right after I graduated from high school. A peach on my right hip.

I was class of 2004’s valedictorian and president. The peach made me feel less bookworm, more badass.

I planned on keeping the new ink hidden from my parents, but I never could keep a secret from my mom. I walked straight into her bedroom as soon as I returned from Psycho Tattoo and whispered, “Can I tell you a secret?”

Her eyes lit up. She nodded.

I pulled my blue jean skirt down just enough to reveal the peach.

A smile spread across her face. “Can I get one too?” she fired back in equally hushed tones.

We were conspirators. Always.

Sometimes I post about how much I miss my mom on Facebook. Usually around Christmas or Mother’s Day. Sometimes around her birthday.

People often offer words of comfort in response: “She’s with you every day.” “She’s there, just not physically!” “She’s always in your heart.” “She lives on in you.”

And that’s how I know that the supportive people on Facebook are wrong.

My mother is not with me every day. And she won’t be there on my wedding day.

The photographer won’t take a photo of us as she zips up the back of my dress. She won’t laugh nervously as she meets my fiancé’s family for the first time. And she certainly won’t help me reach the minimum balance on my hair and make-up bill.

“She’s with you” is a nice thing to say, a nice way to cope. But I had my mother with me for 27 years, and I can tell the difference.

When people see my tattoos, they sometimes tell me, “I love tattoos on other people, but I don’t think I could ever get one.”

They explain, “I don’t think I could pick something that I’d be okay with forever.”

I’ll nod and pretend I understand, but really, I know nothing lasts forever.

My mother died five days before Christmas. She was in a coma before my sister and I ever arrived at the hospital in Tennessee.

I used to come up with positive spins on the grief, like “We had 27 years together, and all of them were great” or “It’s better she went quickly instead of watching her suffer.”

The truth is 27 years were not enough. The truth is I’m jealous of everyone who gets to say goodbye before losing someone they love.

The truth is if I had the choice between more time with my mom and closure at the end, I don’t know which I would choose.

The truth is it doesn’t really matter anyway. No one gets that choice.

When I was young, my mother once asked me if something were to happen to her, would I want her to come back as a shooting star or a budding rose.

I didn’t answer. I thought it was a stupid question.

My most recent tattoo is on my left forearm. It’s the largest and boldest and most colorful of them all. And it’s the only one I see every day—a pair of budding turquoise roses.

It reminds me of her, but not because of the question she asked when I was young. It reminds me how she let me be me. How she taught me to trust myself. How she helped me bloom.

And despite what all my wonderful Facebook friends may say, I realize my mom won’t be sitting behind me on the first row when I say forever to the man of my dreams this November.

But I find peace in knowing I’ll be wearing her love on my arm. On that day and always. 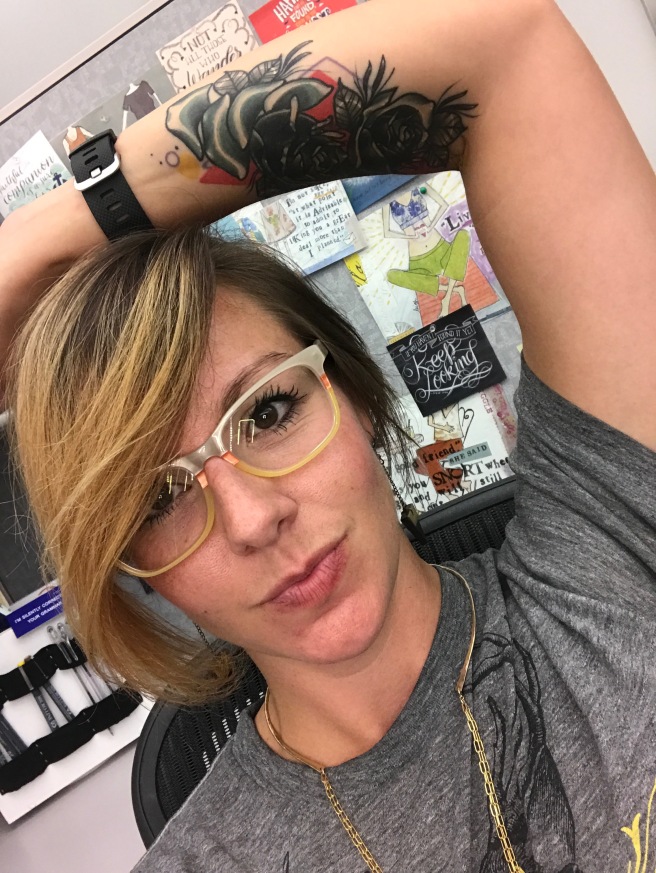 use your words here: Cancel reply