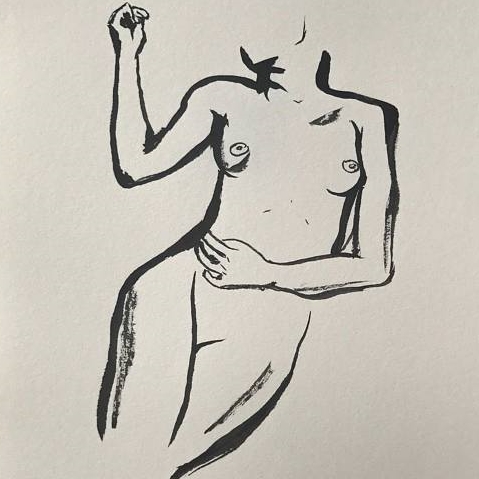 When I was 17, about to turn 18, and finishing my senior year of high school, I asked my mom if she and my dad would buy me breast implants as a graduation gift.

Not surprisingly, she said no. Mom was all about loving your body. Not so much about altering it to appease society’s unrealistic expectations of how women should look.

What mom didn’t know was how I had longed for bigger breasts ever since my darling duo started to fill in and then came to a sudden halt at what struck me as far short of the finish line.

She also didn’t know that my then-boyfriend had an obsession with big boobs, a fact I stumbled upon when using his laptop. While typing a Google search that began with the letter “b,” the search engine offered me his recent searches as suggestions.

I like to half-jokingly describe my figure as chocolate-bar shaped. When people arch a confused eyebrow in response, I’ll explain, “You know, like a rectangle. Broad shoulders. Broad hips. Broad waist. Flat chest. Built like Kit Kat.”

In college, I gained the cliché “freshmen 15”…two years in a row. Much to my dismay, my boobs refused to put on a single pound. Instead, my figure shifted from boyish to full-on doughboy. The same boob-obsessed boyfriend told me he was no longer attracted to me. And that was how we ended.

Without his standards weighing in, I finally saw myself through my lens of beauty. I realized how I loved my pale skin, dotted with freckles along my shoulders. And I stopped trying to brown it in the sun.

I rediscovered my big brown eyes, which always reminded me of my mother’s. And I stopped wearing green-tinted contacts.

I embraced my fat bottom lip, which often appears crooked in photographs. And I began drawing attention to it with bright lipsticks.

I even found love for my boobs—their roundness, their perkiness, their density. And I threw out every last one of my push-up bras.

In 2015 at the age of 29, I found myself once again single for the first time in a long time. Online dating had become a thing, and I threw up a profile hoping to meet someone new.

An older, newly divorced banker chatted me up. We both liked University of Georgia, literature, and witty banter. It seemed like a good match. After getting to know him over text messages, we met in person for a drink. I wore a navy dress and dangling gold earrings, hot pink lipstick and high heels. I felt fabulous and flawless.

Within an hour of the encounter, his tone grew serious as he leaned in toward me and asked, “Have you ever thought about getting a boob job?”

When I returned home that night, I plucked off my jewelry and slipped out of the dress. In front of a full-length mirror in my bedroom, I removed my bra and underwear. I looked at my body and resisted the urge to scrutinize it.

Instead, I looked with love. I saw a woman who won’t settle for less than she deserves. I saw someone who worked hard to find herself and fights to be the most authentic version of that self every day. I saw strong arms and healthy legs and a well-fed stomach.

And sitting proudly on my chest, I saw the boobs—my boobs. The boobs that are exactly right for my body—even when I don’t realize it. The boobs I have loved and hated and loved again.

They may never win a wet t-shirt contest, but those boobs helped me narrow my dating pool by one shallow divorcee that night. And that’s more than good enough for me.

Personal note: This post is by no means suggesting that having small boobs is better or worse than having big boobs. It’s an account of the journey I took to love my body the way it is. It is also not suggesting that there’s something wrong with breast implants. Everyone’s journey is different As long as you have found or are moving toward a place where you love yourself, you’re doing it right.

Image (Abstract Nude Female Laying Down) is from Ceres Fine Art and available for purchase via Etsy.

use your words here: Cancel reply