Staring at her hands to avoid the jurors’ intrusive eyes, she spat out answers. Each word bitter and heavy on her tongue.

A guilty verdict would surely dig a needle in his arm. So she swallowed the truth and set herself free.

He waited for an hour, a painful hour. And during that painful hour, he reread the note in his mind 227 times. Two hundred and twenty-seven!

He paced among the back-to-school clearance leftovers, willing her to show up. Margret Ann may not have said “yes” exactly, but she hadn’t said “no” either.

When he finally saw her bouncy red curls and eight-year-old swagger turn the corner by the spiral notebooks, he shoved the pink gel pens behind his back. Waiting until her red Converse with the rainbow laces were just inches from his flip flops, he presented them like a bouquet of fresh carnations.

These are for you.

He waited for an hour, a lingering hour. Because that’s how long it takes high school girls to get ready.

So even though she said Pick me up at 7:00, he sat with her parents through Wheel of Fortune AND Jeopardy.

Margret Ann’s parents weren’t quite sure what to make of sixteen-year-old Toby Malarky, frozen on their couch with the best posture they’d ever seen. His favorite shirt ironed crisp and tucked into his “nice” blue jeans. Hair slicked to one side, school-picture-day style. Cologne overdosed by about two and half pumps.

When Margret Ann finally came down the stairs, pink lips the color of those gel pens in his memory, all the air Toby held inside his whole body seemed to get vacuumed out in an instant.

He waited for an hour, an indecisive hour. Before texting her after that first date.

But they didn’t say a damn thing about texting. So Toby wrote, revised, erased, and rewrote texts for 60 fat minutes before settling on one identical to his first draft.

Margret Ann danced around her pink bedroom before flinging herself on the bed, giggling with glee.

He waited for an hour, a panicked hour.

Sweat ran down his face like condensation on a Coke bottle. He wiped it away with the cloth napkin every chance she looked away, but she wasn’t looking away enough. She hardly ever looked away.

Margret Ann prattled on about Yale or Georgetown or even NYU. Five acceptance letters had arrived just that week. Her freshly-painted pink fingernails flew through the air with every animated word.

Toby couldn’t focus on her excitement. He nodded and smiled and munched on the most expensive meal he hoped he’d ever have to pay for. But all he could think about was the ring in his pocket, the question on the tip of his tongue.

After one hour and four courses he cut her off mid-sentence and blurted it out.

Immediately, he wished he’d made it sound more like a question.

He waited for an hour, a terrifying hour. Smack-dab in the middle of First Presbyterian. Standing by the altar with two best friends by his side, Toby’s insides bubbled like a pot about to boil over.

At first they said she was just running late, but as minutes swelled into half-hours, he knew it was something else. He saw concern and pity beginning to fill the eyes of the guests.

Staring up at the rafters of that old sanctuary, Toby willed her once again to appear. With his mind racing and face growing hot and pink, Toby pulled his phone from his jacket pocket. His fingers flew over the keys; he knew what she needed to hear.

Margret Ann, you don’t have to do this if you’re not ready just yet.

I’ll wait for you as long as it takes.

Minutes passed. You could hear a pink gel pen drop in that airy church.

And then you could hear the soft buzz of a phone vibrating. Toby took a deep breath and looked at the text.

On my way! Sry I alwys keep u waiting. xoxo -MA

No need to be sorry, he thought. I love every horrible minute I spend waiting on you.

Beware of uninvited visitors, the slight slip of paper warned.

Sarah chuckled to herself: These fortunes keep getting weirder and weirder.

Staring out the open window, she crunched absently on the stale cookie,

never seeing the eight-legged enemy that tiptoed silently inside.

We dodge the questions like two school kids playing tag, chirping “We’ll do it when we’re ready.”

We see what happens when there’s nothing left to run from. 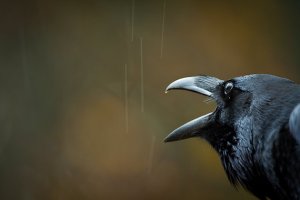 “I’ll make that there scarecrow look more like you.”

Gargleblaster #160: Answer the question “Why do birds suddenly appear?” in exactly 42 words.

As the LCD ticked away the time she had left, Joseph took her speckled hand in his.

“You’ve fought a good fight, old friend,” he choked. “But don’t you stay for me.”

Gargleblaster #158: Answer the question “Tell me something, old friend: Why are you fighting?” in exactly 42 words.